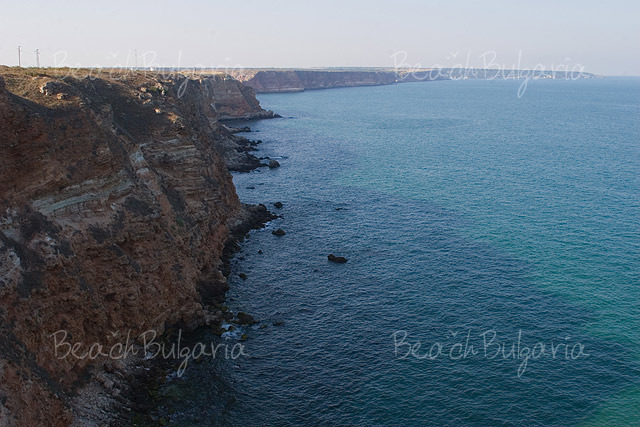 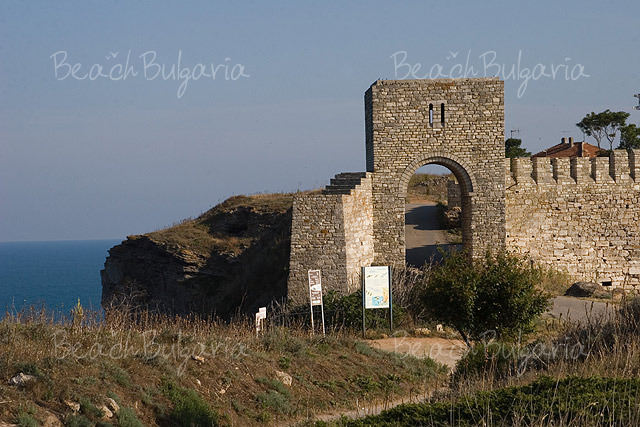 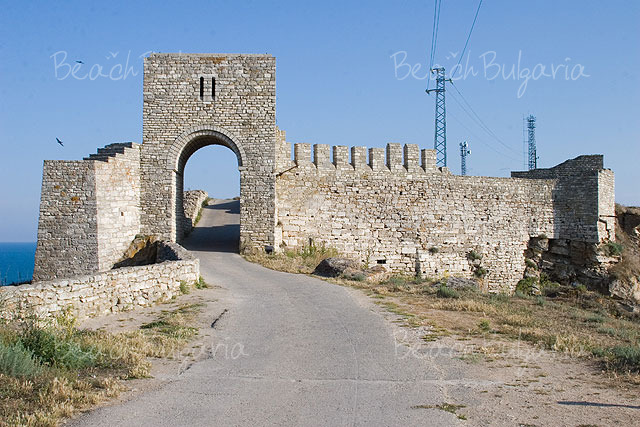 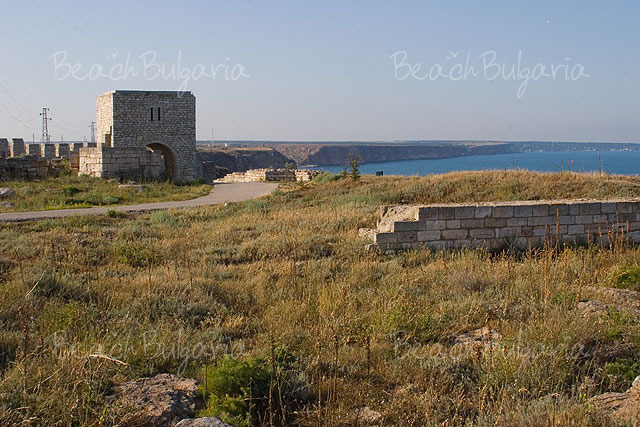 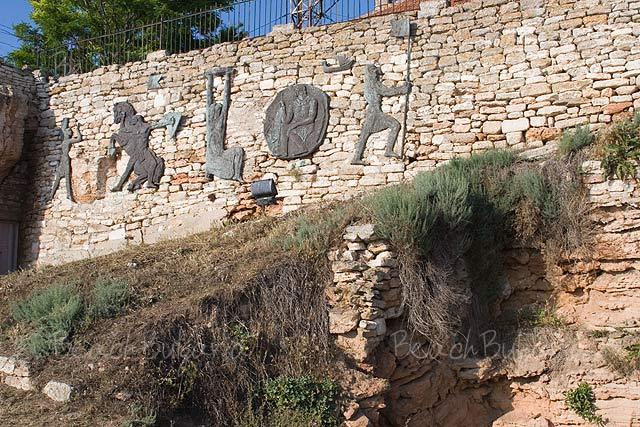 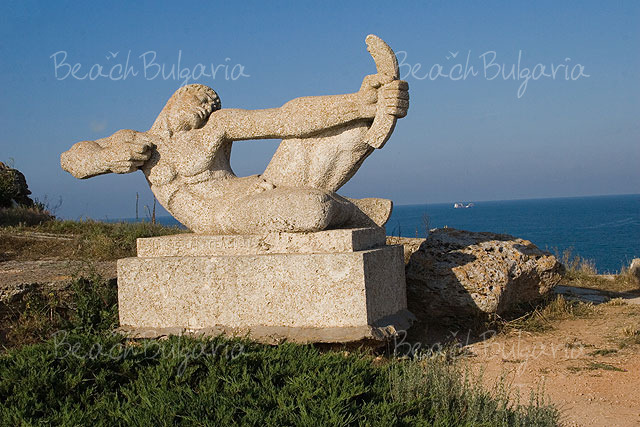 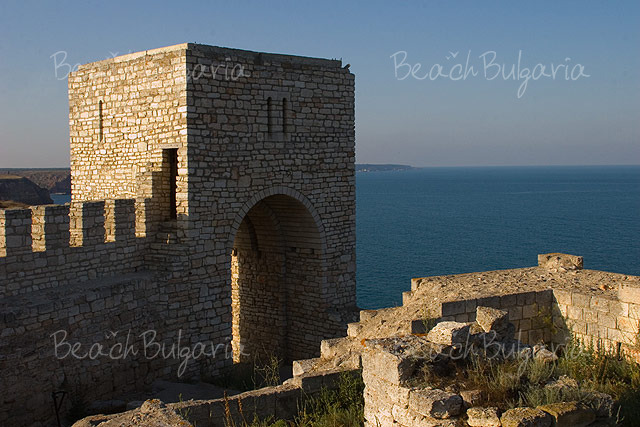 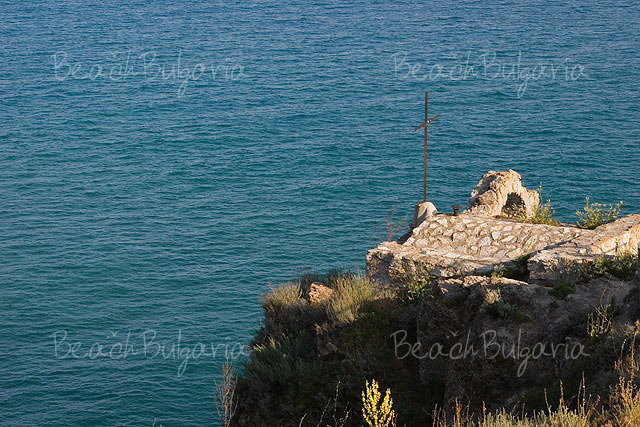 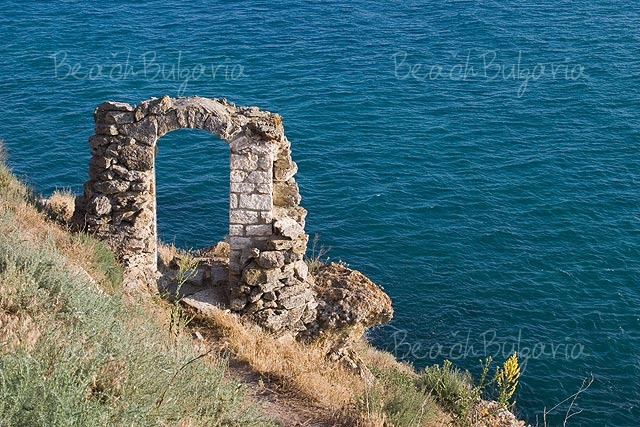 Cape Kaliakra - the place, where you can listen to legends, buried in sea shells and sea waves rumour One of the most beautiful and strangest places along the Bulgarian North Seaside is definitely Cape Kaliakra. It is situated 12 km east from Kavarna and 60 km northeast from the Bulgarian sea capital Varna. A narrow rocky peninsula cuts 2 km through the sea and impresses with its 70 km long rocks, embracing it alongside. The iron oxide composition of the rocks gives red colour to the cape, which is usually compared to a fiery sword, cutting the blue- green sea waters. For its natural beauty this place was called Kaliakra- Beautiful Cape. In ancient times the inaccessibility of the rocks became a reason for the building of a fortress around these lands. The Thracian used to call it Tirizis, the Romans- Akra, and the Byzantines- Acres Castelum. The rumours tell that plenty of treasures from Persia were buried in the caves around the cape. This myth is attracting treasure- hunters and divers now. The name of the cape is connected to many legends. The most popular of them is the one about the 40 Bulgarian girls. Back in times in order to escape from some conquerors the girls braided their hairs together and hand  in  hand jumped into the sea depths. At this place now an obelisk, named The gate of the 40 Virgins stands. The legends tell that the girls are still alive and have turned into seals and swans. Another story tells about St. Nicola, the seamen protector. He was running on this ground, trying to escape from oppressors. The more he ran the more the land was stretching towards the sea. At the end of the cape he was caught and killed. At this place a little chapel, symbolizing his death rises now. Along the sea coasts of Kaliakra plenty of enemys ships have sunk. Kaliakra is also the spot, where the greatest sea battle of Black Sea happened. The Russian squadron defeated the Turkish Armada and this victory marks the end of the Russian  Turkish war (1787  1791). The ancient town was embraced by three rows of fortress walls, some of them still being present today. The walls used to separate the town in three parts- suburbs, outer and inner town. The first strengthening line is found at the very beginning of the cape. It was built by the Roman Imperator Justinian. Beautiful tower from the 13th Century is situated at the entrance of the wall. In the suburbs a Roman tomb - necropolis and water - main are preserved. Except for rich history, the beautiful region treasures unique nature as well. Kaliakra Nature Preserve spreads on 688 decares. The park is home of starlings, blackbirds, and cormorants. Interesting view are the rare dolphins, swimming about in the sea. Via Pontica  one of the main birds migration paths is situated in Kaliakra too. The region is very attractive with its bright  coloured flowers, blossoming during spring and summer. A number of 100 floodlights are sweeping on the beautiful lands at night, and can be seen even from Romania and some of the Bulgarian Black Sea resorts. Interesting site worth to be seen in close vicinity to Kaliakra is the Plateau of Dobrudja. Between Kaliakra and Shabla a couple of bays, embraced by stone blocks and greenery have formed picturesque terraces. They are called Kamen Briag (The Stone Coast). Nearby the archeological preserve Yailata is situated. Here the oldest 8000  years  old ancient stone tombs are found. Scores of cave homes with two, three and five rooms are found as well. According to the historians these lands were inhabited by Thracian, Hellenes, Romans, Slavs and Old Bulgarians. An ancient church, built in the rocks is also preserved in the area. St. St. Constantine and Elena Church was actually a cave home, which became a church later on during the Middle Ages. Yailata keeps an antique wine  cellar from the fifth century. It represents a tub- shaped room, where the grapes were squashed. Traditionally each year on July, 1st many people meet together to celebrate Bulgarias July Morning in Kaliakra. Exotically dressed people come together to meet the sun- rise. Girls with hairs braided in flowers and boys with guitars, all covered with finery and tattoos meet to spend some unforgettable time at the unforgettable Cape Kaliakra.